“Amidst the debate on Brexit which reaches new low points every day, this is a most welcome contribution. We need a serious attempt to evaluate the best form of institutions to govern us given what we know about human nature. This does not necessarily mean unconstrained democratic nation states, but neither should we be governed by bureaucracies with no obvious means of accountability. This is one of many fundamental aspects of the EU debate which is being largely ignored. Mark Brolin tackles this issue.”

“An important and timely contribution to the debate about the EU that offers some unique insights into the evolution of the EU, its structural flaws, and its ideological biases.”

“Mark Brolin reveals the inexorable dynamics of ever closer union and the deficiencies of the current institutional set-up. I doubt that these evils can be cured.”

Roland Vaubel, Professor of Economics at the University of Mannheim

“If still in doubt this book makes it perfectly clear that the EU of today is a pipe dream and that taxpayer money could be much better spent elsewhere.”

“The American experiment with constitutional democracy began with 13 then-sovereign US states somewhat reluctantly delegating precise and limited powers to the federal government; in Europe, by contrast, member nations have for the past several decades been more than willing to cede wide-ranging governing authority to Brussels. Neither system, unfortunately, has succeeded in preventing federalist principles from being overridden and, indeed, crushed by Leviathan. In A State of Independence, Mark Brolin draws implicitly on public choice theory to document the inevitable centralization of power in Brussels, explained in part by the personal interests of the EU’s bureaucrats in expanding the size and scope of the European managerial/administrative state, shows its negative impact on national sovereignty and individual liberties, and argues forcefully that Britain’s exit from the Union would have salutary economic and political effects both at home and abroad. Brolin supplies a roadmap for substantive European reform that should be read by Eurosceptics and defenders.” 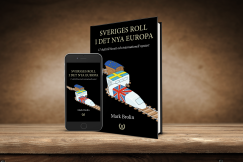 I am equally happy that The Role of Sweden in a Changing Europe has been endorsed by every Nordic No-to-EU movement as represented by:

Lave K. Broch, Board member of Folkebevægelsen mod EU as well as The European Alliance of EU-Critical Movements (TEAM).

Helle Hagenau, Board member and Head of international relations at Nei til EU.

Ulla Klötzer, ex-chair of Alternativ till EU and board member of The European Alliance of EU-critical Movements

How to overcome Tribalism, the Shouty Minority and Facebook Toxicity(Politico

Still formidable but SNP is singing its swan song (The Times

Why Boris will bounce back also from the Christmas Party Affair (Studio Ett, Radio

Why the moralising of the Swedish Social Democrats reflects that their power era is coming to an end (Timbro/Smedjan;

This is why official Sweden always folds when Brussels asks for more, opening article in a debate between Mark Brolin and Swedish EU minister Hans Dahlgren ( Expressen